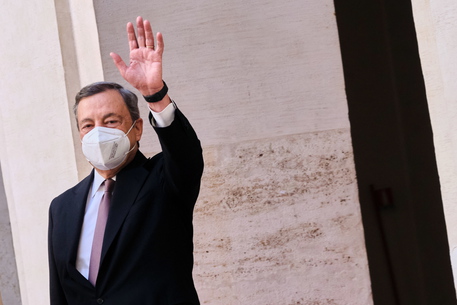 (ANSA) - ROME, SEP 2 - Premier Mario Draghi on Thursday reiterated a plea for all Italians to get vaccinated against COVID-19 and voiced "solidarity" with those who had fallen victim to the "odious violence" of anti-vaxxers.
Foreign Minister Luigi Di Maio and top health officials have received repeated death threats because of their pro-vax stances.
"I want to express full solidarity to all those who have been subjected to violence on the part of anti-vaxxers, a particularly hateful and cowardly violence when it is directed against those who are in the front line against the pandemic," Draghi said.
"I reiterate the invitation to get vaccinated, an act towards oneself and towards others", he said.
Some 80% of Italians will be vaccinated against COVID-19 by the end of September, Draghi told the press conference. "We are already at 70% completely vaccinated," he said.
Draghi said the application of Green Pass vaccine passports was going well because "we were well-prepared" to implement it.
He said Italy could face its post-COVID reopening "with tranquility" and noted that 91.5% of school teachers had had at least the first COVID jab.

He said Yes to a third dose of the vaccine and to compulsory jabs.
Draghi added that the economy was growing better than expected and there had been good jobs figures.
"The real challenge now is to maintain the growth rate," he said.
The government had a full agenda ahead of it including new measures to boost competition and justice reform, the premier said.
"Then we will have to face the fundamental problem of active employment policies. It is to be expected that many sectors will have to restructure." Draghi was speaking after intragovernmental tensions rose Thursday after a rightwing League MP voted against the government's Green Pass vaccine passport on Wednesday night.
Claudio Borghi voted against the government having made the passport compulsory for long-distance trains and buses and domestic airline flights, a move that has sparked widespread protests by anti-vaxxers.
On Thursday Borghi tried to row back his vote telling La Stampa newspaper: "The Green Pass is substantially a disguised obligation. It was not a vote against the Green Pass, but one to improve it".
Centre-left Democratic Party (PD) leader Enrico Letta slammed Borghi's vote saying "it is a choice that puts the League out of the government majority. Clarification is needed".
The nationalist League retorted "It's Letta who is out of this world!" League leader Matteo Salvini said "if the State imposes the Green Pass, let it also guarantee rapid COVID tests, free for all".
The government's COVID-19 Green Pass vaccine passport became compulsory for travel on long-distance trains, buses and domestic airplanes on Wednesday amid an alert for announced protests by anti-vaxxers.
Police heightened security at train stations overnight against the anti-vaxxers, who had threatened to block trains Wednesday afternoon.
But the planned protests largely failed to materialise, apart from a 30-strong demo outside Rome's Termini Station including militants from the far-right Forza Nuova movement.
In Naples only two demonstrators came to the main rail station while in Genoa about a dozen protesters turned out, and in Turin one man was arrested.
In Rimini, an anti-vax stronghold, just a handful of 'No Green Pass' protesters made it to the station.
Interior Minister Luciana Lamorgese had said there would be a zero tolerance policy against anyone found guilty of trying to interrupt a public service, which is a crime in Italy. Foreign Minister Di Maio, who has received death threats on social media for his pro-vax stances, warned that "blocking the possibility of moving means repressing freedom".
Trade unions had also warned against the planned blockade saying "anyone who decides to interrupt services, in the name of the freedom to not get vaccinated, will not have our support".
Italian anti-vaxxers posted death threats against 5-Star Movement (M5S) bigwig Di Maio in Telegram chat rooms on Tuesday.
"Another rat to be executed", "we need lead", and "you must die", were some of the messages.
Postal police have started examining illegal activities of anti-vaxxers on the Telegram portal, in their threats against pro-vaccine officials and journalists.
Lamorgese said Wednesday the government will beef up measures to protect people against Web-based hate after a spate of attacks by anti-vaxxers against doctors, journalists and politicians including Di Maio.
Rightwing leaders like the League's Salvini have said that while they condemn violence, they understand the anti-vaxxers' anger and no one should be forced to get the COVID jab.
There have been a number of violent protests and other incidents involving anti-vaxxers in Italy recently.
On Sunday night a top virologist, Matteo Bassetti, was accosted by a 46-year-old man who has been cited for issuing serious threats.
The man reportedly came across Bassetti in the street and started following him, filming him on his phone and shouting at him: "You're going to kill all of us with these vaccines and we're going to make you pay".
Meanwhile in Rome Monday, a video journalist from La Repubblica daily was attacked by a protester at an anti-Green Pass sit-in outside the Education Ministry. And a pro-Green Pass teacher received a bullet in the mail.
The Green Pass had already been obligatory for indoor venues like restaurants, cinemas, theatres, gyms and swimming pools.
(ANSA).