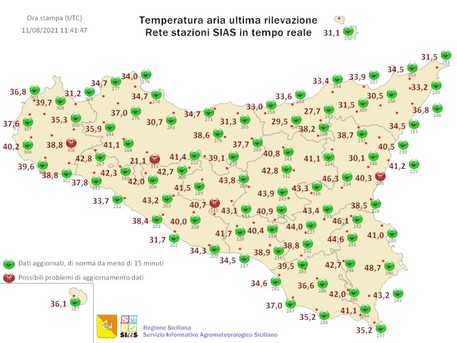 (ANSA) - ROME, AUG 11 - A temperature of 48.8°C was registered in the province of Siracusa on Wednesday by Sicily's SIAS agency in what looks set to be a new European record.
"If the figure is confirmed after the appropriate analysis, it could be the highest value ever registered on the European continent," said 3bmeteo.com meteorologist Manuel Mazzoleni.
"That would beat the previous record of 48°C taken in Athens on July 10, 1977 and it would even beat the record of 48.5°C recorded at an unofficial station at Catenanuova in August 1999".
Italy is currently baking in the Lucifer heatwave, which is expected to peak later this week.
Scientists say the climate crisis is causing heatwaves and extreme weather events to be more frequent and more intense.
(ANSA).