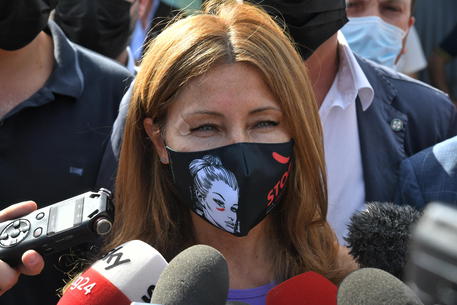 (ANSA) - ROME, JUL 28 - The authorities on Wednesday started the procedure to remove Elisabetta Palmieri, the director of the Santa Maria Vetere jail near Naples where 52 prison officers were arrested for alleged brutality in 'punishing' rioters in April last year.
A Naples court, meanwhile, decided that two of the guards who alleged organized the beatings, Gaetano Manganelli, 45, and Pasquale Colucci, 53, should stay under house arrest.
Naples police sent in special penitentiary police forces after the April 6 riot at the jail at Santa Maria Capua Vetere near Caserta north of Naples.
The special forces are suspected of brutality and may also face charges of torture in the methods used to 'punish' the rioters, judicial sources have said. A preliminary investigations judge (GIP) said prisoners were made to strip and kneel and beaten with guards wearing their helmets so as not to be identified in what he called "a horrible massacre".
Some 15 men were also put into solitary without any justification, the GIP said.
Police reportedly found chats on the suspects' phones including, before the alleged violence, "We'll kill them like veal calves" and "tame the beasts", and afterwards "four hours of hell for them", "no one got away", and "(we used) the Poggioreale system", referring to a tough Naples prison.
Some of the alleged rioters had their hair cut and beards shaved off.
Among those probed are doctors who allegedly falsely certified that some warders had been hurt in the clashes.
Justice Minister Marta Cartabia has said that CCTV footage of the violence showed that the officers had betrayed the Italian Constitution. (ANSA).