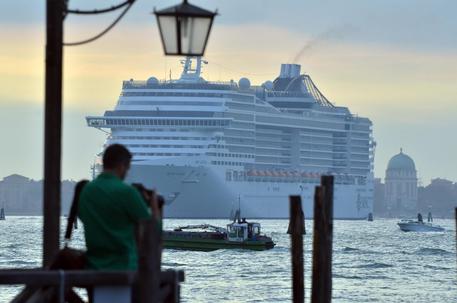 (ANSA) - ROME, JUN 21 - Venice's survival will be even more in peril if the lagoon city doesn't issue a permanent ban on cruise ships docking there, UNESCO said Monday.
The UN art heritage body said it would examine a proposal to put Venice on its endangered list at its plenary session on July 16 to 31.
If approved, it would demand urgent action by the Italian government by next February.
A ban on cruise ships appeared to have been passed earlier this year but the seaborne behemoths subsequently returned to Venice.
There have long been calls for cruise ships to be banned from Venice because of their impact on the city's delicate historic buildings and on the lagoon's unique ecosytem.
The drive to ban them intensified after a cruise ship crashed into a quay in June 2019.
Last May 12 the Lower House gave definitive approval to a decree banning cruise ships from mooring in Venice.
Cruise ships have been stopped from landing in the centre of Venice for good thanks to the decree the government approved, Culture Minister Dario Franceschini said in April.
The decree says a plan for the berth of the cruise ships outside the Venice lagoon must be drawn up and implemented.
In the meantime, big ships will keep docking at the city's industrial port, which has been the landing site for them since last December. (ANSA).