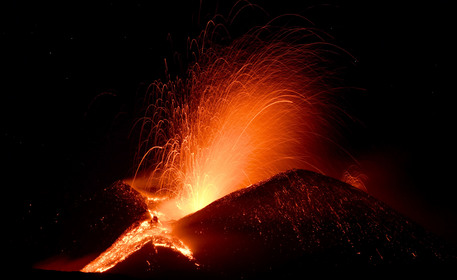 (ANSA) - CATANIA, MAY 26 - Etna on Wednesday belched out another lava plume and column of ashy smoke in the latest of a string of spectacular eruptions from Europe's tallest active volcano.
The iconic volcano spewed ash and lapilli into a kilometre-high column.
The ash was scattered onto nearby Catania but the eastern Sicilian city's airport's air space was not closed, as it has been for some recent eruptions.
A southeastern breeze helped take the high and dense column of lavic ash across the city.
Lapilli also fell onto a number of smaller towns and villages on Etna's southern slopes including Nicolosi, Trecastagni, Pedara, Aci Sant'Antonio and San Gregorio, where the blasts rattled windows and doors.
The volcano also emitted a fresh lava flow.
Volcanology institute INGV said it was the latest "paroxysm" in Etna's new phase of volcanic activity, which began in mid-February.
The INGV also said it had found the "beating heart" of the volcano which is fuelling the activity, and "the energy inside the volcano is increasing". (ANSA).