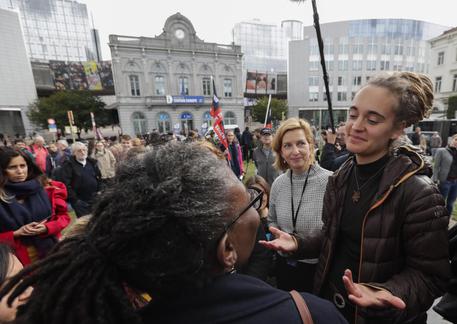 (ANSA) - AGRIGENTO, MAY 19 - An Agrigento preliminary investigations judge (GIP) on Wednesday shelved a case against former Sea Watch 3 migrant rescue ship skipper Carola Rackete for allegedly resisting arrest and showing violence against a warship after she rammed a police boat in landing in defiance of former interior minister and anti-migrant League chief Matteo Salvini's closed ports policy in July 2019.
Prosecutors had asked not to pursue the charges against the 33-year-old German and GIP Alessandra Vella concurred, dismissing them.
Earlier this week another GIP dropped charges of instigation to commit crimes against far-right League leader Salvini for allegedly urging violence against Rackete by calling her a criminal who had tried to kill Italian police by ramming their boat in defiance of his closed ports policy.
The judge ruled that death threats on social media following Salvini's criticism of Rackete were not his fault.
But a separate defamation case against Salvini for his statements against the former Sea Watch 3 commander, whom he also said was in league with migrant traffickers, is going forward.
Rackete sued Salvini, 48, for his allegedly defamatory statements about her. (ANSA).