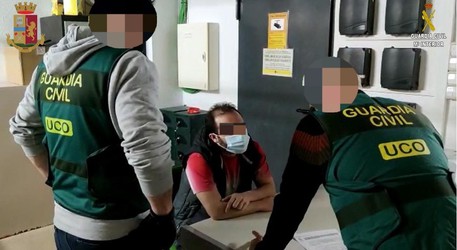 (ANSA) - ROME, MAR 12 - A member of the Calabrian 'Ndrangheta who had been on the run since 2018 and was on the list of Italy's most dangerous fugitives was arrested in Barcelona on Friday.
Giuseppe Romeo, a key player in the Calabrian Mob's domination of the European cocaine trade, has been sentenced to 20 years in jail on mafia and drug trafficking charges.
Romeo, 35, from the 'Ndrangheta fief of San Luca, was arrested by the Guardia Civil with the help of Italian prosecutors.
Interior Minister Luciana Lamorgese said the arrest "rewards the work and the great determination of state police investigators, coordinated by the anti-mafia directorate of Reggio Calabria".
She said it was a "hard blow" to 'Ndrangheta's narcotics trafficking activities.
She said the Italian police had shown "dedication, professionalism and great ability to cooperate with authorities in other countries".
'Ndrangheta is Italy's richest and most powerful mafia, outstripping Sicily's Cosa Nostra and the Camorra in Naples.
(ANSA).