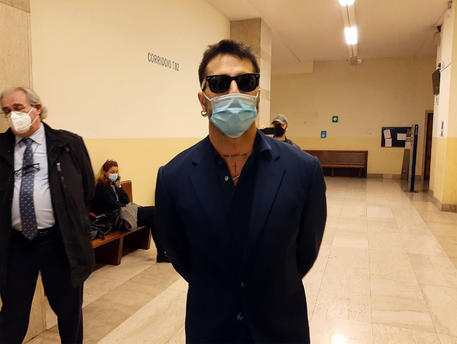 (ANSA) - ROME, MAR 11 - Italy's former paparazzi king and media personality Fabrizio Corona was sent back to jail Thursday after a period receiving therapy on parole under house arrest after a series of trials for blackmailing VIPs.
The Catania-born former VIP photographer, 46, cut his wrists immediately upon hearing the ruling from surveillance court judges.
He was taken to hospital.
Corona threatened to kill himself if the judges did not reverse their decision.
"You have created a monster," he said in a video message to the judges.
Corona first returned to jail in March 2019 after a series of parole violations.
The ex-paparazzi was punished for saying on TV show Celebrity Island that the wife of singer Riccardo Fogli allegedly cheated on her husband, former lead singer for supergroup Pooh.
In February 2019 Corona was ordered to leave his home in Milan.
The home was seized from him a year previously by the Milan court.
The 'eviction' notice was listed in the official deeds of the surveillance court, which upheld a therapeutic sentence for Corona with his official residence in the home.
In January 2018 a Milan prosecutor asked a seized-assets board to confiscate Corona's home but give him back 1.8 million euros.
The flat is in Via de Cristoforis, a stone's throw from Corso Como, the heart of the Milanese night scene.
Corona has pled for the house to be left to him so he can sell it and raise some of the money he still owes.
The 1.8 million is part of 2.6 million euros seized from the former glamour photographer.
Corona was the central figure in a series of investigations into the 2007 extortion scandal known as Vallettopoli, which involved many celebrities in the entertainment business and sports.
He was arrested and spent 77 days in prison; however, on 29 May 2007, he was released but placed under house arrest.
He wrote a book, La mia Prigione (My Prison), about his experiences as a result of the Vallettopoli scandal which received much attention from the Italian media.
Also, in 2009, he was charged over blackmail photos.
In 2013 he was sentenced to five years' imprisonment, became a fugitive but finally gave himself up after four days.
Corona has also been in the limelight for his celebrity girlfriends, most notably actress Nina Moric and showgirl Belen Rodriguez. (ANSA).