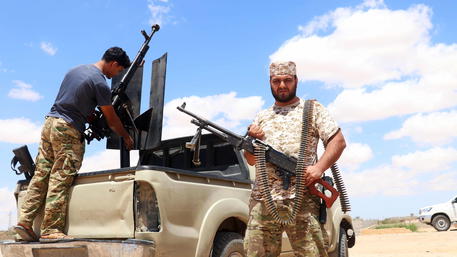 (ANSAmed) - TUNIS, NOVEMBER 20 - Rival forces have not yet begun their withdrawal from counter positions, as required by the ceasefire agreement reached in Geneva on October 23, UN special envoy for Libya Stephanie Williams said in a videoconference Friday at the UN Security Council. Nonetheless, she added, recent economic and political developments after the ceasefire have raised hopes in the North African country. Williams noted in a statement that: ''While the Joint Military Commission seeks to operationalize the ceasefire agreement, the two sides have not yet begun to withdraw their forces. Government of National Accord forces remain stationed at Abu Grein and al-Washkah, with patrolling activities reportedly taking place. Military cargo flights were monitored at al-Watiya and Misrata airports. The Libyan Arab Armed Forces and auxiliaries continued to set up fortifications and military outposts equipped with air defence systems between Sirte and al-Jufra, and in the northern area of al-Jufra airbase. Intense cargo aircraft activity was monitored between Benina airport, al-Jufra and al-Gardabiya airbase.'' The ceasefire calls for all military units and armed grpups to withdraw from the frontlines while mercenaries and foreign fighters must leave Libya territory within 90 days. (ANSA).