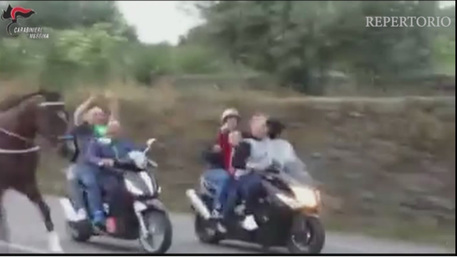 (ANSA) - MESSINA, NOV 11 - Italian police on Wednesay arrested 33 people as they broke up a Cosa Nostra clan in Messina.
They said the operation had enabled them to break up the Galli Clan and its web of drug pushing across the Sicilian city.
The clan also organised betting on illegal night-time horse races in the city and its outskirts, police said.
Harness races took place after groups of youngsters on scooters blocked access to streets and roads, police said.
The clan used two groups to push drugs, police said.
One of them was allegedly lead by a woman who used her 12-year-old son to deliver the drugs, thereby eluding police controls.
The other group, led by mafioso Carlo Altavilla, got huge quantities of drugs from Calabria and Campania, where the 'Ndrangheta and Camorra mafias respectively hold sway, police said.
As for he horse racing and illegal betting, police said operations were led by a fruit and veg trader, Giuseppe Irrera, the son-in-law of jailed clan boss Luigi Galli.
Galli, who is being detained under the tough 41 bis mafia prison regime, allegedly handed over the reins of the highly lucrative betting and racing business to Irrera, police said.
Whenever disagreements arose over the various rackets, the clan asked the Santapaola clan in Catania to resolve them, police said.
That clan is led from prison by historic superboss Benedetto 'Nitto' Santapaola.
Those arrested Wednesday have been charged with mafia association, illegal horse racing, illegal betting on unauthorised sporting competitions, mistreatment of animals, fraudulent transfer of goods, extortion, conspiracy to traffic drugs, and drug pushing.
Anti-mafia prosecutors in Messina are leading the probe. (ANSA).