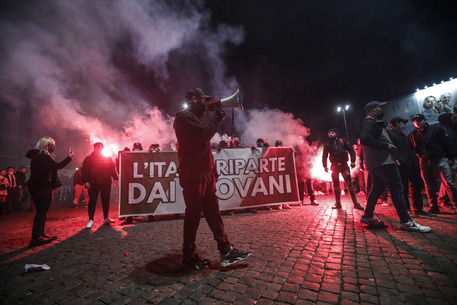 (ANSA) - ROME, OCT 28 - This week's sometimes violent protests against new COVID restrictions were not centrally organized and coordinated but involved separate groups of far-right and far-left extremists, soccer ultras and criminal elements, according to a national committee for public order and security meeting chaired by Interior Minister Luciana Lamorgese and involving top police, intelligence and security officials on Wednesday.
The portests, it said, did not have a "single organisation".
Protesters the objects including bottles and flares and clashed with police in several cities including Rome, Milan and Turin after protests in which shop windows were smashed and other damage to property inflicted.
There had been speculation that ultra groups were organising.
The government has shut gyms, swimming pools, cinemas and theatres and made bars and restaurants stop serving at six o'clock amid a COVID spike.
It has passed relief measures including aid packages for the affected sectors. (ANSA).