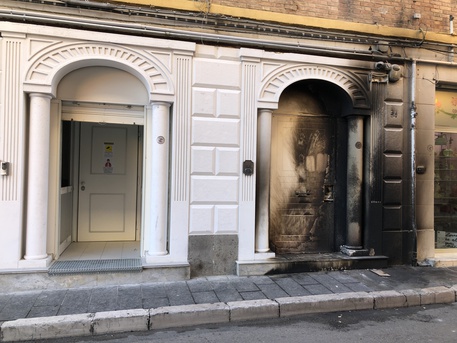 (ANSA) - FOGGIA, OCT 20 - A fresh arson attack was made Monday night on social-care facilities belonging to the Vigilante brothers in the Puglia city of Foggia.
It was the fourth since the start of the year.
The last came during lockdown in April with a bomb outside the 'Sorriso di Stefano' ((Stefano's Smile) elderly centre.
On Monday night it was the turn of the 'Ristorazione Più' kitchen in via Saverio Altamura, where meals for the poor and homeless are prepared.
Brothers Luca and Christian Vigilante were first hit on the night of January 3 when Christian's car was blown up in via D'Aragona.
Then, less than two weeks later, at dawn on January 16, a bomb exploded outside the Sorriso di Stefano day centre for the elderly, in the first of the two attacks on the structure.
According to CCTV footage, a man with his face covered poured flammable liquid on the front door of the Ristorazione Più kitchen and then set it alight.
Despite "significant damage", the owners said it would continue its activity.
The attacks are believed to have been staged by local mafia against whom Christian Vigilante is a witness in a protection racket case.
His brother Luca told ANSA: "This is a full-blown challenge.
They want to make scorched earth around us until we stop doing business".
Puglia's mafia is called the Sacra Corona Unita (United Holy Crown, SCU).
The SCU is Italy's fourth and smallest mafia.
The others are Calabria's 'Ndrangheta, Sicily's Cosa Nostra, and Campania's Camorra. (ANSA).