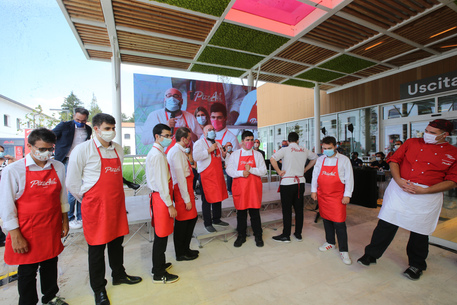 Adele Lapertosa (ANSA) - ROME, SEP 9 - (By Adele Lapertosa).
Soft lights, no loud noises, priority status at the cash desks, specially trained personnel and images that explain what can be found in each aisle - these are some of the measures adopted at the Coop store in Monza which is set to be Italy's first 'autism friendly' supermarket when it opens to the public on September 10.
The project, which was presented by Coop Lombardia in Monza on Tuesday, features the collaboration of two associations for relatives of autistic people, Alla3 and PizzAut.
"We are the first supermarket in Italy to do anything like this and probably the first in Europe too," said Alfredo De Bellis, Vice President of Coop Lombardia.
"We hope to be copied by other supermarket chains.
"We will extend this model to all the other outlets in Lombardy".
Camilla Galloni, one of the mothers from the Alla3 association, said that traditional stores have "many sensory barriers for autistic people of all ages, such as lights that are too bright and noises that are too loud".
Alla3 contributed to the project by producing graphic signs for supermarket aisles that are suitable for autistic people.
One of the main features is the use of simple images to illustrate actions according to a routine.
Neshat Asgari, an Iranian architect and one of the Alla3 mothers, created the designs used in the supermarket aisles according to augmentative and alternative communication (AAC) criteria.
"They were presented to neuro-psychomotorist autism experts and an association of adult autistic people," explained Asgari.
Autistic people and those accompanying them will have priority status at the tills and will receive a map of the supermarket upon entry.
All of the staff have been given training on recognizing the condition and assisting communication thanks to the contribution of PizzAut, a restaurant managed exclusively by young autistic people which has adapted to the coronavirus emergency by going on the move with a food truck.
"Normality must be inclusive, it is a question of being civilized," said Nico Acampora, the founder of PizzAut who has an autistic son.
"We will have staged a little revolution when there is no longer any need for Coop or PizzAut".
Autism does not regard a small number of people.
Indeed, it is estimated that "there is one child with this condition for every 70 newborns" said Lucio Moderato, the director of Servizi Innovativi per Autismo della Sacra Famiglia at Cesano Boscone, in the province of Milan.
Elio, the lead singer of the popular band Elio e le Storie Tese, has an autistic son.
"Everything that's needed is lacking in Italy," Elio said.
"Things are left to individual initiatives and those who should do things by law, do not.
"All autistic people would have a better future if they could have access to therapies and treatments that exist.
"These should be provided by law but they are not made available". (ANSA).