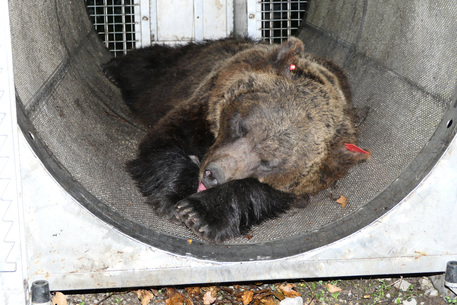 (ANSA) - ROME, 29 LUG - Forest rangers on Wednesday managed to capture and put a tracking collar on an animal that is suspected of being one of two dangerous bears currently causing concern in the province of Trento.
The bear, a female accompanied by three cubs that was subsequently released, is suspected of being the animal that attacked two men on June 22.
A legal challenge blocked an order by the provincial government for the bear to be eliminated.
It will only be possible to know if the bear is the same one that attacked the men after the results of tests comparing its DNA to samples taken from the clothes of the victims of the attack.
The other case regards a bear known as M49, which has escaped from its enclosed area at a wildlife park at Casteller, south of Trento, for the second time.
That bear, which is also nicknamed Papillon, was captured for the first time last year after killing livestock. (ANSA).