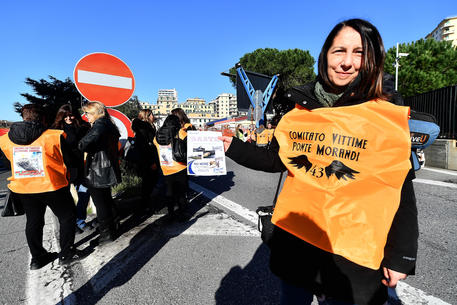 (ANSA) - GENOA, JUL 16 - The relatives of the 43 people killed in the 2018 Genoa motorway bridge disaster said Thursday that Premier Giuseppe Conte had called to inform them Wednesday that Benetton was to be eased out of motorway company ASPI after its allegedly negligent maintenance ahead of the collapse.
"He called us yesterday, he thought about us," said the victims' relatives association.
The stake in ASPI of the Benetton-controlled Atlantia group will gradually be cut to zero after state bank CDP takes a 51% controlling stake in the motorway company.
Industry Minister Stefano Patuanelli on Thursday hailed the operation as "fundamental" and said "the state will act as a guide".
He stressed that in the ASPI takeover by CDP ahead of its being floated and becoming a public company, Italian taxpayers' savings "are not at risk".
The operation was approved after tense overnight talks Tuesday-Wednesday between government partners who had differing views on forcing Benetton out of the motorway business.
The senior partner, the anti-establishment 5-Star Movement (M5S), was the most insistent that the clothing to catering giant should be ejected.
The new bridge in Genoa, designed by city native and starchitect Renzo Piano, has been built in record time.
It features 'sails', reflecting the northwestern port city's rich maritime heritage. (ANSA).