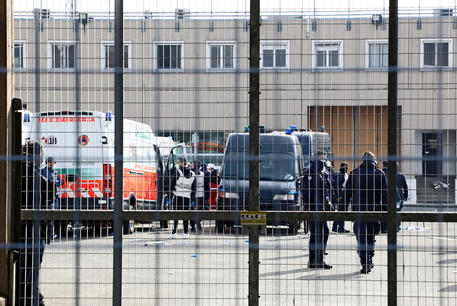 (ANSA) - Rome, March 10 - The death toll from the unrest that gripped many of Italy's prisons after restrictions were imposed due to the coronavirus emergency climbed from seven to 11 on Tuesday.
Eight of the deaths stemmed from rioting at Modena's prison, where all but one victim is thought to have died of overdoses after inmates raided the jail's pharmacy.
The other person is thought to have died of smoke inhalation after matrasses were set alight during the protests. Three prisoners are also reported to have died in overdoses at a prison in the central province of Rieti, where inmates had control of the whole complex for a spell. Police are still trying to track down 23 prisoners who escaped during unrest at a complex in the southern city of Foggia, although 11 other fugitives were tracked down overnight.
Order was restored at many of the prisons on Tuesday, although protests continued at several others.
These included Palermo's Pagliarelli jail, where 400 inmates are said to have taken control of part of the complex and some climbed onto its roof.