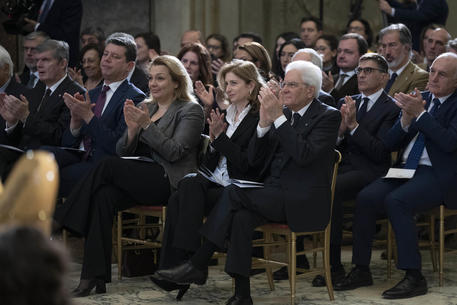 (ANSA) - Rome, February 10 - The 'foibe' massacres of Italians by Yugoslav partisans at the end of WWII were a "national disaster", President Sergio Matteralla said on national Foibe Remembrance Day.
He urged Italians to keep the memory of them alive as a warning, and warned against "small pockets of regrettable militant denialism" by some on the left.
February 10 is the 'National Memorial Day of the Exiles and Foibe'.
The 'foibe' refers to mass killings mainly in Friuli-Venezia Giulia , Istria and Dalmatia during and after World War II against the local Italian population.
Foibe are narrow Carsic pits or gorges into which victims were thrown, sometimes alive.
As many as 15,000 Italians were tortured or killed by Yugoslav communists who occupied the Istrian peninsula during the last two years of the war.
Many of the victims were thrown into the narrow mountain gorges during anti-Fascist uprisings in the area and the exact number of victims of these atrocities is unknown, in part because Tito's forces destroyed local population records to cover up their crimes.
"Today the real adversary to be fought, the strongest and most insidious one, is the indifference that often feeds on the lack of knowledge." The importance of the president's warning was highlighted by news that two plaques to the memory of Foibe victims had been defaced and damaged in Massa Cararra on the north Tuscan coast.
The vandalism was decided by parties across he political spectrum.
Rightwing and centre-right parties campaign hard to get Foibe remembrance day set up, saying that the tragedy had been swept under the carpet by anti-Fascists in the postwar years.
Mattarella attended a commemorative concert at the presidential palace Sunday, on the eve of Foibe Day, and met representatives of the families of those driven out of Istria and Dalmatia by Tito.