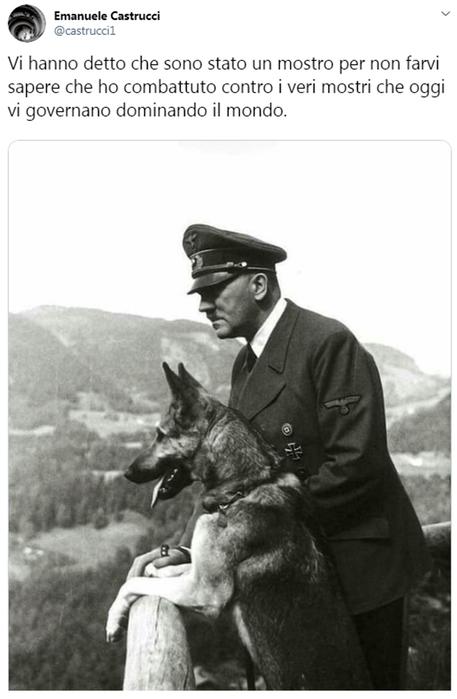 (ANSA) - Florence, December 2 - University of Siena Rector Francesco Frati issued a statement on Monday condemning pro-Hitler tweets by Professor Emanuele Castrucci. A post said that "Hitler, even though he certainly wasn't a saint, in that moment was defending the entire European civilisation".
The professor also tweeted a picture of the Nazi dictator with a dog. Frati called the tweet by Castrucci, who teaches philosophy of law and philosophy of public policy, shameful and offensive and said a disciplinary procedure has already been started.
Castrucci appealed to his right to freedom of expression, even though apology of Fascism and Nazism is against the law in Italy.
He also said that what he wrote amounted to "wholly personal opinions...expressed outside of the activity of teaching".
Castrucci's explanation was given to the head of his department of law, Stefano Pagliantini.
Pagliantini sent Castrucci an email asking to meet to clear up the case on Monday morning.
Castrucci's Hitler tweets were condemned by Italian political parties on the centre-left and centre-right.
The leader of the ruling centre-left Democratic Party (PD), Lazio Governor Nicoila Zingaretti, said "this is a serious matter and we have to keep our guard up against the return of such phenomena".
Mara Carfagna of Silvio Berlusconi's centre-right opposition Forza Italia (FI) party said it was a "disgusting case" and there should be "universal condemnation".
The ruling anti-establishment 5-Star Movement (M5S) said "he can't teach in the university".
The case came after last week's police probe into a group of Italians trying to set up a Nazi party in Italy.
On Friday a 57-year-old man from Monza was arrested for weapons possession in a probe into the group.
Police found a rifle, a hunting rifle and two revolvers in the home of Maurizio Aschieri.
Aschieri is suspected of being in contact with a former Calabrian 'Ndrangheta mafia member turned informant who allegedly trained the movement's 'soldiers'.
Police on Thursday staged a major operation to gather evidence for a probe into a group of far-right extremists who allegedly wanted to found a new Nazi party in Italy.
The homes of 19 alleged right-wing extremists, featuring women in leadership positions, in various parts of Italy were searched.
The suspects allegedly wanted to create an openly pro-Nazi, xenophobic, anti-Semitic group called the "Partito Nazionalsocialista Italiano dei Lavoratori" - the Italian National Socialist Workers' Party. The party's programme talks of "the defence of national identity and the race".
Some of the suspects allegedly had access to arms and explosives and conducted recruitment activities on social media.
Among the people implicated in the probe is an ex-con who is thought to be a senior figure in the Calabria-based 'Ndrangheta mafia.
This person is a former State witness and a former member of the Forza Nuova far-right group, sources said. A married wife and mother aged around 50, who is based in Padua, works in administration and has no criminal record, was allegedly a senior member of the group.
She allegedly went by the name of "Hitler's Sergeant Major" and investigators found swastikas, Nazi flags and anti-Semitic material at her home.
Another suspect is a 26-year-old woman from Sicily who won an online beauty contest called 'Miss Hitler' and spoke at a far-right conference in Lisbon in August. The suspects are accused of forming and participating in a subversive association and instigation to commit criminal acts.
The suspects allegedly set up a chat group for the military-style training of militants and made contact with other neo-Nazi groups outside Italy, including the 'Aryan White Machine - C18' and Portugal's 'Nova Ordem Social'.
"I would only marry a Jew to be able to torture him day after day," read one of the comments.
"Just talking about Jews makes me itch," read another.
"These foul beasts should be exterminated".
Pamphlets insulting Emanuele Fiano and Laura Boldrini, MPs for the centre-left Democratic Party (PD), were among the seized material.
Fiano, who is Jewish, and Boldrini received messages of solidarity from the PD and other parties.