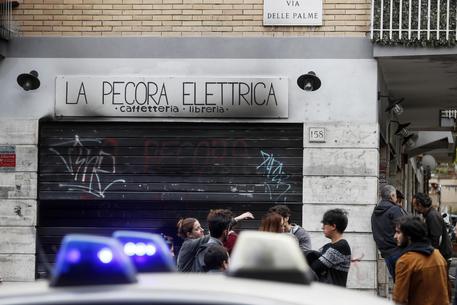 (ANSA) - Rome, November 6 - A fire in the night between Tuesday and Wednesday has devastated a renowned anti-fascist bookstore and café in Rome, which was scheduled to re-open on Thursday after renovation work following another blaze on April 25.
Carabinieri police and firefighters are investigating the cause of the fire and are not ruling out it was an arson attack, possibly linked to the local drug trade, investigative sources said Wednesday.
Traces of flammable liquid were found at the scene, sources said.
The owner of the bookstore "La Pecora Elettrica" (the electric sheep) in Rome's Centocelle district said his shop was targeted by arsonists.
"Last night's fire destroyed it again", he said.
"They got in and set everything on fire", he said of the alleged arsonists.
A previous arson attack completely destroyed the store in April this year. Police said there might be a link between the two fires and one that broke out in a shop across the street last month.
The two stores, which were the only ones open at night, may have been disturbing local drug pushers working in an adjacent park, police said. Lazio Governor and Democratic Party (PD) leader Nicola Zingaretti said the bookstore "is a place of culture and socialization".
"It was set on fire tonight after last April's fire", Zingaretti wrote on Twitter.
"To the owners I say: hang in there and fight to give back to Rome the beauty and passion of your social commitment".