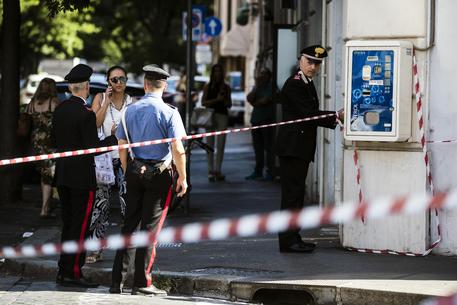 (ANSA) - Rome, September 9 - A Carabiniere whose colleague was stabbed to death by an American man after a mix-up over a drugs deal in Rome in late July has been placed under investigation for not bringing his service revolver to the meeting with the two young Americans, military prosecutors said Monday.
Andrea Varriale, who was with Mario Rega Cerciello on the night he was killed, is being probed for "failure to carry out his duties", in what prosecutors said was a formality.
Both officers were therefore without their guns when Cerciello was allegedly stabbed eleven times by 19-year-old Finnegan Lee Elder.
Elder has confessed to stabbing Cerciello Rega while his friend, Gabriel Christian Natale-Hjorth, 18, assaulted Varriale at the end of a chain of events sparked by a drugs deal that went wrong. Both Americans have filed to be released.
A ruling is expected later this month.
photo: Cerciello murder scene