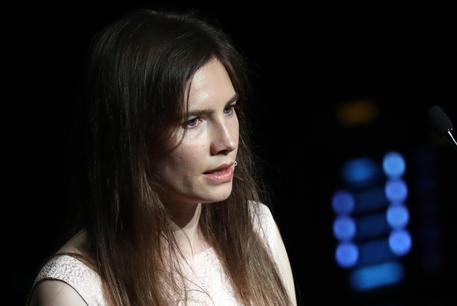 (ANSA) - Modena, August 1 - Amanda Knox and her fiancé Christopher Robinson have complained about "falsehoods" in the media about her recent trip to Italy and the couple's upcoming wedding in a letter to ANSA. The letter referred to reports the couple had launched a whipround to fund their wedding after spending a lot of money to campaign against miscarriages of justice by taking part in a criminal justice festival in Modena hosted by the Italy Innocence Project. The American former exchange student, who was first convicted and later acquitted of murdering British housemate Meredith Kercher in Perugia in 2007 after a long judicial ordeal, said this was a misrepresentation.
Knox, 32, thanked the Italy Innocence Project for paying for her hotel room and covering a quarter of the cost of her flight.
But she added that she had to spend over $10,000 on security measures and she also had to pay for the travel expenses of her mother who was "a necessary emotional support on this traumatic journey". This money was taken from the couple's savings for their wedding, they said.
The letter stated that, while the couple filed the legal paperwork to be married in December for tax and insurance reasons, the wedding ceremony itself will not take place until February, 2020.
"Like many young couples today, we've replaced the traditional gift registry with a wedding fund," the letter read.
"Thousands of people do this every year because traditional gift registries are outmoded - couples who already live together don't need toasters and dishware...
"We shared our wedding story on social media, but we did not advertise our registry or ask strangers to donate.
"The tabloids sent our registry page to the world and then blamed us for their actions.
"They then accused me of lying about the financial reality of our trip to support the Italy Innocence Project. "This 'scandal' is yet another example of irresponsible media profiting by manufacturing outrage.
"This is just the latest example of the deliberate misrepresentation and character assassination that I've suffered since I was thrust unwillingly into the spotlight in 2007.
"It is a flagrant violation of journalism ethics and comes at the opportunity cost of informing people about issues that actually matter - like wrongful convictions". Knox spent almost four years in an Italian prison following her conviction for Kercher's murder.
In 2015 she was definitively acquitted by the Italian Supreme Court of Cassation.