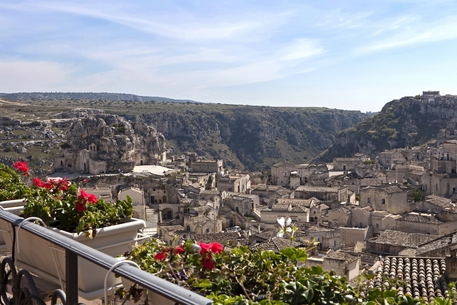 (ANSA) - Matera, July 15 - Rocco Petrone, the immigrant son of a couple from the town of Sasso Castalda, near Potenza, was the engineer monitoring the countdown on July 16, 1969 for the launch of the Apollo 11 spacecraft in Cape Canaveral that would take two men to the moon for the first time, Neil Armstrong and Buzz Aldrin.
A mechanic engineer, he was the director of launch operations.
He pronounced the key work "go" kicking off the mission, accomplishing the "American dream" of generations of migrants - a dream that landed on the moon on July 20, 1969.
Half a century later, Matera, the 2019 European capital of culture, has organized an event to remember the Basilicata native called "Matera vista dalla luna" (Matera seen from the moon), in cooperation with the museums of the Basilicata region and the municipal administration.
The 10-day event in the city, which also hosts the prestigious Centro di geodesia spaziale (Center of space geodesy), includes performances, book presentations, movie screenings, shows on the moon and concerts at the local Cava del Sole.
The initiative starts on July 16 through July 24.
A key event to take place on July 17, at 7 pm, is Luna Italiana, on the terrace of Palazzo Lanfranchi, which will be entirely dedicated to Petrone's figure and role.
A documentary - "Luna Italiana. Rocco Petrone e il viaggio dell'Apollo 11" (Italian moon, Rocco Petrone and the voyage of the Apollo 11" - will be screened afterwards.
The documentary is produced by Istituto Luce-Cinecittà for A+E Networks Italia with the patronage of the Italian space agency, in cooperation with NASA, and directed by Marco Spagnoli. Another key appointment, one of the highlights of Matera 2019, is scheduled at 9 pm on July 18, when the Cava del Sole will host the multimedia performance "Apollo Soundtrack".
The Multimedia show written by Brian Eno, Roger Eno and Daniel Lanois, will be performed for the first time outside of the United Kingdom by British band Icebreaker with B.J. Cole, Roger Eno and the participation of famous Irish cellist Gyda Valtysdottir. Also on the agenda is the concert on 19 July of the Subsonica band at the Cava del Sole as part of their "8 Tour".