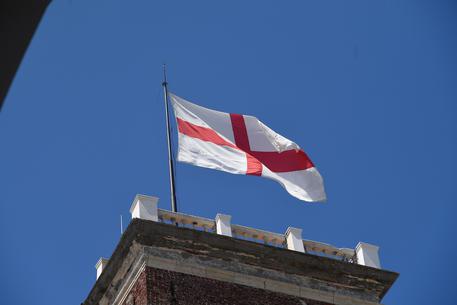 (ANSA) - Genoa, April 12 - The mayor of Genoa says a British royal is set to visit the northwestern Italian port city in the latest development in a row over the use of the Flag of St George.
"Buckingham Palace replied to our letter and congratulated us on our research into the history of the exchanges over the years, while the organiser of royal trips said a family member may pay us a visit," said Marco Bucci.
Bucci last July asked Queen Elizabeth to pay Genoa back for allegedly allowing the British crown to use the Cross of St George free of charge for the last 250 years.
In the Middle Ages London obtained the use of the flag, which had been used in the Crusades and by the maritime republic of Genoa as a warning sign to hostile ships, for its fleet in exchange for an annual tribute which over the years turned into a gratuity.
Bucci wrote to the queen in what he called "the greatest marketing campaign Genoa could stage".
In his letter, Bucci said "Your Majesty, I regret to inform you that from my books it looks like you didn't pay for the last 247 years".
letters were also sent to Prime Minister Theresa May and London Mayor Sadiq Khan.
photo: Cross flies from Doge's Palace in Genoa