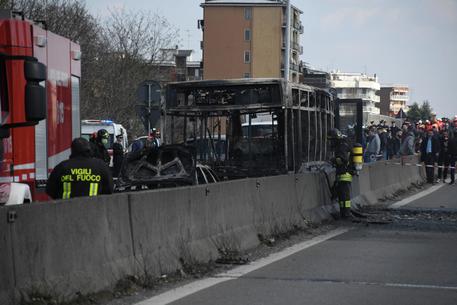 (ANSA) - Milan, March 20 - A 47-year-old man was held by Carabinieri police on Wednesday after allegedly hijacking a bus with schoolchildren aboard and subsequently setting it on fire in an apparent attempt to kill them, sources said.
According to an initial reconstruction, the man hijacked the bus with 51 pupils from a middle school in the northern province of Cremona.
The suspect has been named as Ousseynou Sy, a man with a criminal record who is originally from Senegal but has been an Italian citizen since 2004.
He said he wanted to kill himself and "stop the deaths in the Mediterranean," the sources said.
"No one will survive," Sy said after hijacking the vehicle, according to Carabinieri Provincial Commander Luca De Marchis.
After being stopped by police, he got off the bus and set it alight, presumably having poured inflammable liquid inside.
But the Carabinieri managed to get the children out by smashing windows at the back, the sources said. Before being stopped, the suspect had also tried to ram through a road block. Twelve children and two adults were taken to hospital after suffering smoke inhalation, as was Sy, the sources said.
The bus is a write-off.
A teacher who was with the children said that it was not the first time Sy drove a bus with pupils on board.
"We knew him" the teacher said, adding that the hijacker was angry about the government's migrant policy.
"He wanted to get to the runway at (Milan's) Linate (airport)".