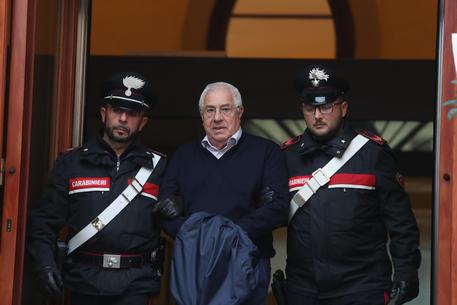 (ANSA) - Palermo, December 4 - An 80-year-old man suspected of being the new Cosa Nostra head was among dozens detained on Tuesday in a big bust targeting the Sicilian Mafia, sources said. Settimino Mineo, who is 'officially' a jeweler, was allegedly designated the new head of the criminal organization following the death of boss-of-bosses Totò Riina in 2017. Investigators suspect that Mineo was selected thanks to the reconstruction of the 'cupola' of senior mobsters, a sign that the organization wanted to go back to having a single command structure, as the bosses had not met for some time. Mineo was detained by Carabinieri police after Palermo prosecutors issued warrants for 46 people to be held. The suspects are accused of crimes including mafia association and aggravated extortion.
Mineo was sentenced to five years in prison in a huge case pursued by slain anti-mafia magistrate Giovanni Falcone.
He was arrested again 12 years ago but then released after serving an 11-year-term.