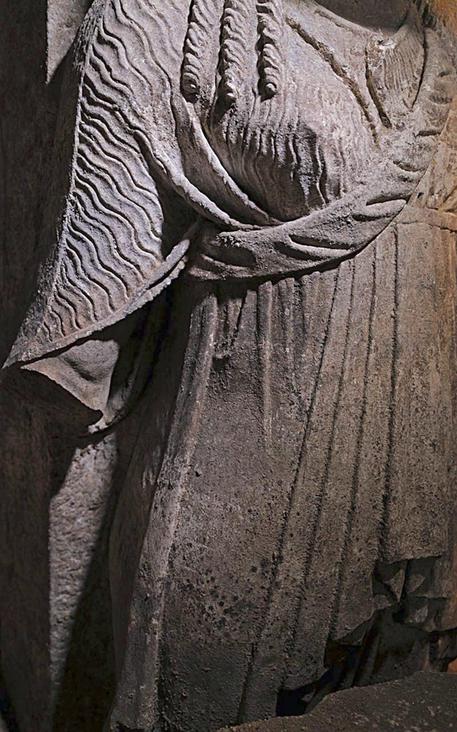 (ANSA) - Genoa, April 16 - A row erupted Monday after a statue of an ancient Greek statesman was covered up for a conference on Islam near Savona.
"There as no censorship" in draping the stature of Theban leader Epaminondas, Liguria Islamic Federation chief Chams Eddine Lahcen told reporters.
"I myself covered the statue but only for ceremonial reasons and for a few hours. It clashed with the Moroccan setting. Our Islam is moderate and this row wounds it".
Anti-migrant League leader Matteo Salvini latched onto the case, saying "am I the only one this seems like madness to?".
Nationalist Brothers of Italy (FdI) MP Ylenja Lucaselli said the covering up of Epaminondas and the bare back of a woman in a painting was a "side effect of failed multiculturalism".
Iran censored the teats of the symbol of Rome, the she-wolf who suckled Romulus and Remus, during its recent coverage of a Champions League first leg match between Roma and Barcelona.
The symbol, part of Roma's emblem, was blurred out over the offending parts of the animal.
Social media was quick to react, with one post saying "3,000 years ago Romulus and Remus were deprived of their mother's milk but Iranian state TV even deprived them of the she-wolf's milk".
Another post said the Iranian public was likely to find the wolf's teats "saucy".
Rome Mayor Virgina Raggi said "we are proud of the symbol that represents our city".
Two years ago Rome was involved in another Iranian censorship row when nude statues were covered up on the Capitol so as not to offend Iranian President Hassan Rouhani.
Roma lost 4-1 in the quarterfinal tie in Barcelona but staged a sensational 3-0 comeback in the second leg at the Olimpico to qualify for the semifinals, where they face Liverpool, on away goals.
Epaminondas was a Theban general and statesman of the 4th century BC who transformed the Ancient Greek city-state of Thebes, leading it out of Spartan subjugation into a pre-eminent position in Greek politics.