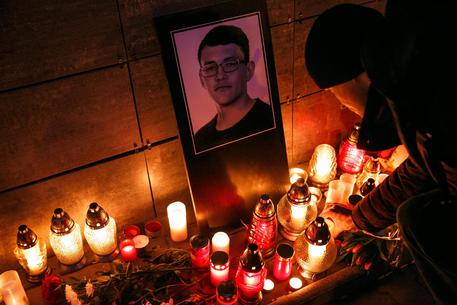 (ANSA) - Bratislava, March 1 - Slovak police have arrested Italian entrepreneur Antonino Vadalà together with his brother and cousin and four other Italian men in connection with the murder of investigative reporter Jan Kuciak and his fiancée, sources said Thursday.
According to local media reports, Vadalà on Thursday morning was arrested with his brother Bruno and cousin Pietro Catroppa as part of police operations targeting two of the entrepreneur's apartments in Michalovce and Trebisov in eastern Slovakia.
Seven Italians were arrested in connection with Kuciak's murder, during searches at Michalovce and Trebisov, Slovak police said. Police chief Tibor Gaspar said the seven were arrested "as suspects, with the agreement of the prosecutor".
All the arrested are Italians: as well as prime suspect Antonino Vadalà and his relatives Sebastiano Vadalà and Bruno Vadalà, Gaspar named the others as Diego Roda, Antonio Roda, Pietro Catroppa, 54, and Pietro Catroppa, 26.
Murdered journalist Kuciak, 27, had reported for the news site Aktuality.sk on fraud cases, often involving businessmen and politicians.
Kuciak had in particular investigated the Vadalà family and its alleged ties with the international crime syndicate of Calabrian origin, 'Ndrangheta. The newspaper he worked for published the report on Wednesday.
Kuciak and his fiancée, also 27, were found dead on Sunday at his home in Velka Maca, 65km east of the capital Bratislava.
Italian police alerted Slovak police and international bodies "some time ago" on the the group of Calabrians arrested in the eastern European country on Thursday, judicial sources said on Thursday. Anti-mafia prosecutors in Reggio Calabria "officially brought to the attention of the international police organs and the Slovakian national police the need to monitor the activities of the group of Calabrians arrested because they are suspected of being involved in the murder of the young journalist Jan Kuciak and his girlfriend," a statement said.
Acting Reggio Calabria Chief Prosecutor Gaetano Paci told ANSA his office had also supplied information about the trio's alleged links to the Calabria-based crime organisation 'Ndrangheta.