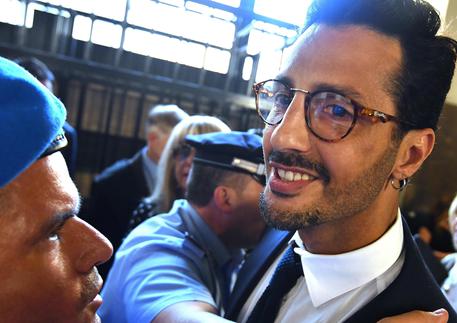 (ANSA) - Milan, February 21 - Former paparazzi king Fabrizio Corona on Wednesday left prison and returned to a therapeutic community near Milan. The former VIP photographer was released by a detention-review court.
He has gone to the community at Limbiate.
Last month a Milan prosecutor asked a seized-assets board to confiscate Corona's home but give him back 1.8 million euros.
The flat is in Via de Cristoforis, a stone's throw from Corso Como, the heart of the Milanese night scene.
Corona has pled for the house to be left to him so he can sell it and raise some of the money he still owes.
The 1.8 million is part of 2.6 million seized from the former glamour photographer, who has been through a series of trials for blackmailing VIPs.
The prosecutor said the money should be returned to Corona because he has "partially paid his taxes".
The prosecutor did not ask fo special surveillance measures to be tightened.
Last June Corona was given a one-year jail term by a Milan court for a case concerning around 2.6 million euros in cash found hidden in a ceiling and in safety deposit boxes in Austria.
Corona, a controversial figure, banged his fists on the table in celebration and shouted "justice is done" when the sentence was read out.
Prosecutors had asked for a five-year term, but Corona was acquitted of two charges - false registration of assets and violation of asset regulations - and convicted only of fraudulent tax evasion.
Corona's assistant, Francesca Persi, was given a three-month term.
Corona was arrested in October while doing social work to serve the final part of a previous jail term for the fraudulent bankruptcy of his agency and for blackmailing VIPs with compromising photographs.
In 2013, the photographer was sentenced to roughly five years in prison.
The June ruling came just days after finance police seized a Milan apartment worth approximately 2.5 million euros investigators believe Corona bought through a dummy purchaser - possibly his co-defendant in the trial, Persi - with financial resources drained from his once high-flying photography agency.