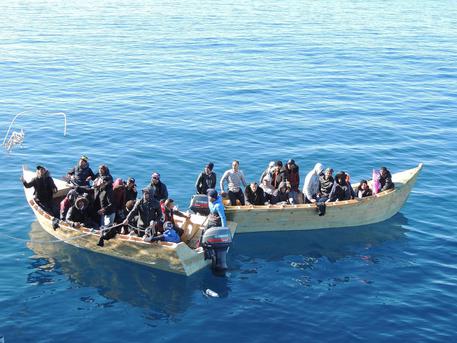 (ANSA) - Rome, February 13 - The EU border agency Frontex and the Italian interior ministry appeared to disagree on Tuesday over the trend in migrant arrivals in Italy in early 2018 - though Frontex later spoke to ANSA and cleared up the discrepancy.
Frontex said that numbers were up in January compared to the previous month and comparable to the same month last year. "The number of migrants arriving in Italy via the Central Mediterranean route in January rose to more than 4,800, double the figure from the previous month, when smuggling activities were affected by fighting near the departure areas and poor weather," the agency said. "The monthly total was roughly in line with January of last year," the EU agency added. Conversely, the interior ministry said migrant arrivals had dropped by 50% over the same period in 2017 to 4,731 so far this year.
The drop was sharper from Libya: 3,534 in 2018, compared to 9,007 in 2017, a drop of 61%, the ministry added. Of the arrivals so far this year, 621 were unaccompanied minors.
But speaking to ANSA later, Frontex said "there is no indication of a change in the general trend of falling" migrant arrivals "which started in summer of 2017". "The number of irregular migrants who arrived in Italy in December 2017 was the lowest in three years. The numbers rose slightly in January, remaining however in line with the January 2017 figures". After the slight rise in January, it said, "the number plunged to 249 in the first 12 days of February, 95% lower than the the same period in 2017". Frontex and the Italian interior ministry appeared to agree on trends in nationality of the migrants arriving in Italy. "According to preliminary data, Eritreans were the largest group of migrants detected on this route, followed by nationals of Pakistan and Tunisia," Frontex said. Likewise, the ministry said Eritreans topped the nationalities arriving at 1,312, followed by Tunisians (763), Pakistanis (279) and Nigerians (252). Frontex also noted an increase in the number of Libyans making their way across the Mediterranean in recent months.
Asylum seekers transferred to other European countries according to relocation agreements were 11,934, the Italian interior ministry added. Overall, the number of migrants arriving in Europe via the four principal sea routes fell by 7% in January over the same month in 2017, Frontex said.