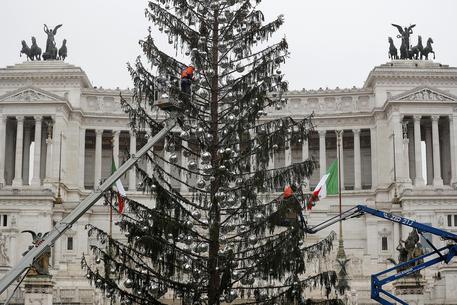 (ANSA) - Rome, January 9 - Rome's once-derided 'mangy' Christmas tree Spelacchio is set for a new life as souvenir blocks of wood and a hut where mothers can nurse and look after their children after its stay in Rome's central Piazza Venezia ends later this week.
"Spelacchio has won the love and affection of most people over time," said Rome Mayor Virginia Raggi, announcing the 'Baby Little Home' that will be made of it after it is removed Thursday.
Recalling the world news headlines it has generated, she said "it has become an international star, and now it will become an example of recycling and re-use".
She said mothers would be able to look after their children in the 'home', which would have "an armchair for nursing mums to feed their babies, as well as a play table for the young ones".
One block of the tree will also be handed over to an artist to be remodelled and go on permanent show, the mayor said.
Councillor Pinucica Montanari said Spelaccio will now gain fresh fame as "the symbol of a circular economy, ever more necessary for Rome's future and that of the new generations". Raggi's anti-establishment 5-Star Movement said Spelacchio would get a send-off Thursday with a "farewell party" in Piazza Venezia.
The messages and wishes that tourists and Romans have hung on its boughs will be turned into a book, they said.
First slammed as a threadbare disgrace resembling a toilet brush, Spelacchio gradually gathered defenders and ended its days as a 'tree of desires' on which selfie-snapping tourists posted their wishes.