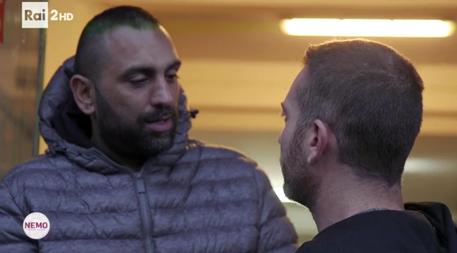 (ANSA) - Rome, November 8 - A journalist and director who work for State broadcaster RAI have been assaulted by the suspected member of a criminal clan in the beach town of Ostia, near Rome, RAI said on Wednesday.
Journalist Daniele Piervincenzi and filmmaker Edoardo Anselmi, who work for Rai2's program Nemo Nessuno Escluso "were violently attacked by Roberto Spada, a member of the Spada family, well-known in the media for several investigations" on charges including corruption, racketeering and drug smuggling, and another man.
The RAI crew was in Ostia to report on the outcome of local municipal elections on Sunday.
The broadcaster said Piervincenzi has a broken nose and a prognosis of 30 days.
Spada, who headbutted Piervincenzi, accused the crew of asking him the same questions for an hour and a half, ignoring his insistence that he had nothing to say, and then "forcing their way into a members-only club, disturbing a session and frightening my son".
"What would you have done?" he demanded on his Facebook profile.
"In the last 10 days at least 30 journalists have come to break our balls, patience has a limit," he said.
Rome Mayor Virginia Raggi called the attack "unacceptable" and vowed to rid Rome of crime and extremism.
"Spada clan violence unacceptable. Solidarity to journalist and filmmaker attacked in Ostia. We'll stop crime and extremism in Rome," Raggi tweeted.
The deputy head of Fascist group CasaPound, Simone di Stefano, also condemned Spada's attack and said they had nothing to with the clan.
CasaPound scored an unexpectedly high 9% in Ostia's municipal elections Sunday.
"Roberto Spada is not a member of CasaPound. We share nothing with him, apart from attendance at a kid's party in a piazza 18 months ago," Di Stefano said.
"We certainly don't answer for his actions and violence is always deprecable," he said.
Piervincenzi said Wednesday Spada should apologise for attacking him and breaking his nose. "It was an unexpected thing, I was doing an interview. We were trying to understand the reasons for the (Spada clan's) endorsement for CasaPound", he said. "I have a compound fracture of the nasal septum," said Piervincenzi. "But we're still on our feet". He denied Spada's charge the crew had frightened his son, saying "I don't think I scared anyone, I'm the scared one. "If he apologises I'm ready to forgive him, but he should apologise to Ostia, where the high crime rate and the clans have spoiled the social fabric of a beautiful place".
Piervincenzi told ANSA: "I'm hurting, and I was hit only because I asked questions".
He said Spada "smiled at me, then hit me violently with a head butt to the nose, breaking it".
Senate Speaker Pietro Grasso on Wednesday condemned the "ignoble violence" of the attack. "A hug and best wishes for a speedy recovery to Daniele and Edoardo, victims of ignoble violence," Grasso tweeted. "Strong and authoritative journalism is a fundamental democratic safeguard for all of us". There are no "no go areas" where crime can run riot in Italy, Interior Minister Marco Minniti said after Spada's attack. Minniti was said to be personally following the incident. The minister said the police were working on the case because the principles of law and order "are fundamental, and there can be no no man's land in Italy".
Judicial sources said Wednesday evening that a criminal probe had been opened into the attack.
Spada is suspected of bodily harm, the sources said, but that could be changed to grievous bodily harm if the journalist's condition worsens, they said.
The case has been assigned to the local anti-mafia prosecutor's office.