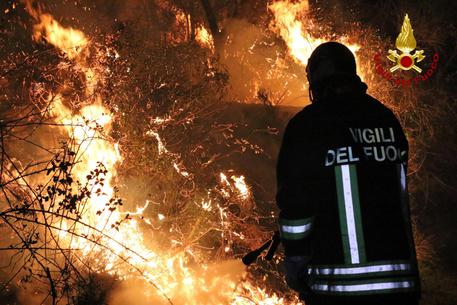 (ANSA) - Milan, October 30 - Lombardy said Monday it would ask for a state of emergency to be declared for the wildfires ravaging the region. "We will ask for a state of emergency," said civil protection regional councillor Simona Bordonali, at a press conference after a meeting of the regional executive with Governor Roberto Maroni. She said she would meet Interior Minister Marco Minniti in Varese this afternoon. Bordonali said fire teams were still fighting five fires near Varese, Tavernerio near Como, Tremosine near Brescia, Veleso near Como and Romagnese near Pavia, while a fire at Forcola near Sondrio was being put out and another at Novate Mezzola near Sondrio had been put out. She said the region's four helicopters were in action along with three Canadairs, two Italian and one Croatian.
"This afternoon," the councillor said, "we will have another two helicopters at our disposal, to which we can add two helicopters from Switzerland, able to drop 4,500 litres of water at a time".