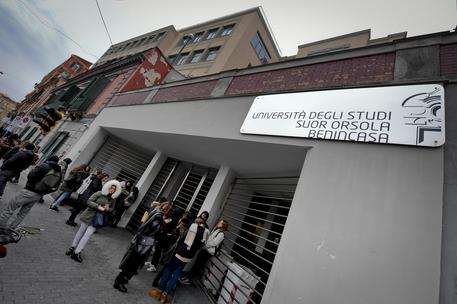 (ANSA) - Naples, September 27 - Lucio D'Alessandro, the rector of Naples Suor Orsola Benincasa university, is under investigation for allegedly helping the son of former minister Ortensio Zecchino get a research position at the institute, several newspapers reported on Wednesday. Zecchino and his son Francesco are not being probed, according to the reports. The news came two days after seven university teachers were arrested by Florence finance police in relation to a probe into the alleged rigging of exams to qualify as lecturers. Another 22 people have been barred from holding academic positions for 12 months in relation to the probe and 59 people are under investigation in total, including two-time former cabinet minister Augusto Fantozzi. The probe was triggered by an alleged attempt by some teachers to persuade a researcher who was a candidate in an exam to qualify as a tax-law teacher to withdraw the bid in favour of a less qualified candidate. The first researcher was allegedly promised a pass in the next exam.
Fantozzi, 77, served as economy and finance minister in the 1995-'96 Lamberto Dini government.
He went on to serve as foreign-trade minister for Romano Prodi's 1996-98 administration.
The seven arrested teachers were placed under house arrest.
They are: Fabrizio Amatucci, of Naples' Federico II University; Giuseppe Maria Cipolla, of the University of Cassino; Adriano di Pietro of Bologna University; Alessandro Giovannini of the University of Siena; Valerio Ficari of the University of Rome 2; Giuseppe Zizzo of the Carlo Cattaneo University of Castellanza in Varese; and Guglielmo Fransoni of the University of Foggia.
Education, University and Research Minister Valeria Fedeli said she wanted to "get to the bottom" of the case.
She said a sort of code of conduct to combat nepotism and corruption in Italy's universities would be launched by the end of October.
Fedeli said her ministry had been working on it for months with Italy's anti-corruption authority, ANAC, led by former top anti-mafia prosecutor Raffaele Cantone, one of the targets on a hit list of the notorious Casalesi clan of the Neapolitan Camorra mafia.
"The draft has been ready since the start of July," Fedeli told reporters.
"It's now at the consultation stage and we absolutely want to wind it up by the end of October".
Fedeli added that this latest instance of corruption was related to university lecturing qualification procedures in 2012 and 2013.
On Wednesday Fedeli said those who report university corruption should be held up as "examples" rather than being discouraged.
Several probes over the years have highlighted high levels of nepotism and corruption in Italian university departments, whose powerful heads are known as 'baroni' (barons).