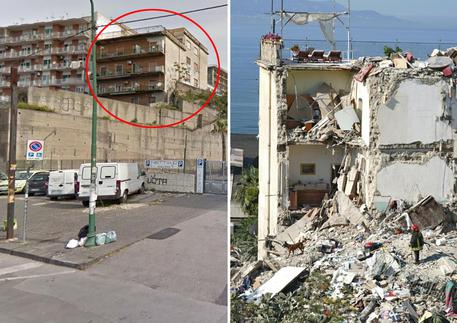 (ANSA) - Torre Annunziata, July 7 - Torre Annunziata Mayor Vincenzo Ascione said Friday that seven people were missing, including two children, after an apartment building collapsed in the southern city near Naples. "According to the information I have, two families are missing," Ascione said.
"One is made up of the parents and two children. The other is composed of three adults.
"In total seven people, although it is difficult to give official news about the number of missing people at the moment.
"No one was living on the first two floors, which were undergoing renovation work.
"The families lived on the third and fourth (floors)".
Rescuers are digging with their hands and dog units are being deployed. Torre Annunziata prosecutors have opened an investigation. When asked if the collapse could have been caused by the renovation work, Ascione replied: "we cannot say". The mayor said the building was constructed between the 1950s and 60s. Eye witnesses said there was no explosion, just the noise of the building collapsing.
A goods train was said to have passed by the building shortly before the collapse. Rail company RFI said the train's vibrations would not have had an effect on the building's stability. Services along a local rail has been suspended with rubble on the tracks. "We are witnessing unimaginable scenes, an inhuman tragedy," said Ascione.
"The rescue workers will not stop while it is possible to bring people out alive".