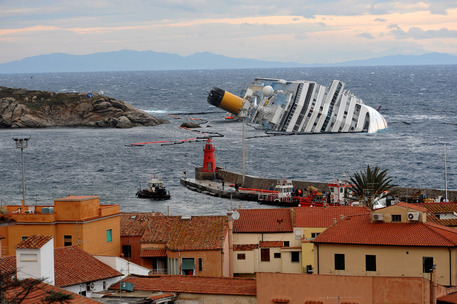 (ANSA) - Giglio, January 11 - The island of Giglio on Friday will mark the fifth anniversary of the Costa Concordia cruise liner shipwreck, as it has done each year since 2013, with a special Mass, the sounding of boat sirens and a torchlight procession in memory of the 32 people who died in the disaster off its coast.
With 3,216 passengers and 1,013 crew members aboard, the cruise ship hit an underwater rock formation off the island's east coast just south of its port at 21:45 on the evening of Friday, January 13, 2012, in a strong impact that opened a hole 70 metres wide on the left side of its hull.
The ship's captain, Francesco Schettino, had decided to "navigate according to his sailor's instinct, closer to the island, trusting in his abilities", wrote judges in the subsequent trial sentence, in which he was given 16 years and one month in prison.
The ship ran aground north of the island's port at Punta Gabbianara, which saved it from sinking 100 metres to the sea floor.
In addition to the 32 people who were killed in the disaster, an additional 157 people were injured.
Schettino lost an initial appeal on May 31 of last year, and received an additional five-year ban on practicing any maritime profession.
His defence team appealed to Italy's supreme Court of Cassation to annul the sentence and is awaiting a decision.
Schettino was the only person to stand trial for the disaster after a number of crew members and company staff reached plea bargains with prosecutors and were sentenced to three years each.
On Friday, a memorial Mass will be celebrated in the church of Santi Lorenzo and Mamiliano where many passengers took refuge after the shipwreck.
At Punta Gabbianara where the ship ran aground, a flower wreath will be placed in the sea followed by a torchlight procession to the memorial plaque marking the disaster, where boats in the port will sound their sirens and a minute of silence will be observed.
Italy's Environmental Minister Gianluca Galletti is expected to attend the ceremony.