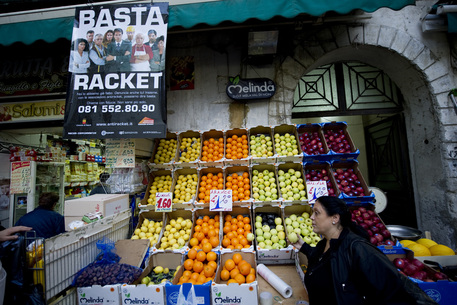 (ANSA) - Naples, October 21 - A Camorra mafia clan discriminated between Italian and foreign market vendors in extorting protection money, prosecution papers showed Friday.
The Mazzarella clan extorted 50 euros a week from Neapolitans and 100 euros a week from foreigners with stalls at the Maddalena neighborhood market, according to testimony from a former Camorra extortion money collector who has turned State's witness.
That racket was worth 13,000 euros a week, he told prosecutors.
The clan was also discriminatory in terms of inventory: foreigners had to purchase counterfeit Adidas and Nike footwear at 30 euros a pair, which the clan bought from the Chinese in Rome at 17 euros a pair. Italians had to sell counterfeit Hogans, which the mafia purchased at 27 euros and which the victims were allowed to price at 35-40 euros a pair. The clan made 20,000 euros a week in this way, the witness said.
The racketeers also forced vendors to buy 10 euros' worth of plastic bags per stall, netting up to 1,300 euros a week.