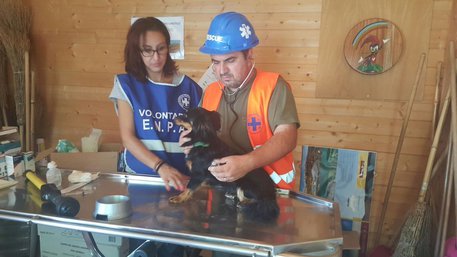 (ANSA) - Rome, August 31 - The rescue yesterday of a little dog named Lola brought to over 400 the number of pets brought to safety in the aftermath of a devastating August 24 central Italy earthquake that killed 293 people and displaced thousands, the National Animal Protection Agency (ENPA) said Wednesday.
A total of 34 ENPA volunteers, vets, and animal protection guards have been working 24 hours a day since the 6.2-magnitude quake to distribute medicine and pet food - 10 tonnes so far - among survivors in Civil Protection tent camps, on farms and breeding facilities, and at mobile feeding stations for roving displaced domestic animals.
Fire fighters on Tuesday found Lola, whose owner Valerio had reported her missing several days ago.
"There was a lot of concern over Lola," ENPA said in a statement. She had been wandering about for a week, but a vet check-up found her to be in good shape. She was given back to Valerio, who "hugged her in tears", ENPA said.
A number of pet cats have also been rescued by placing trap-cages in the debris in the quake area, ENPA said.
The public can report animal-related issues to the ENPA earthquake emergency number 342.9565574 or at terremoto@enpa.org.