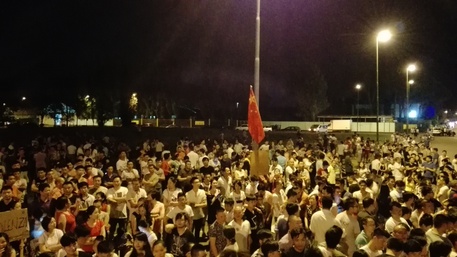 (ANSA) - Florence, June 30 - Two Chinese nationals were arrested Thursday after a revolt by some 400-500 Chinese textile workers at Sesto Fiorentino near Florence following an attempted health and hygiene inspection by the local health authority.
The pair arrested, the head of a local textile company and an employee manning the gate who tried to stop police getting in, have been charged with resisting arrest and injuring public officers.
They will go on trial July 26.
"The police should investigate to get to the bottom of this, I smelt a strong whiff of the Triads yesterday" said the Tuscan anti-crime Caponnetto foundation. Police said they were still trying to establish the full reasons for the revolt, in which the crowd threw rocks, bottles and cans at police, who responded with baton charges.
The Italian media have reported that the workers were protesting an attempt to arrest the company head.
Sesto Fiorentino, like many towns and cities around Florence, has many Chinese-owned textile works.