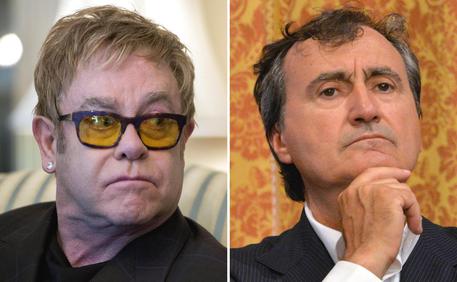 (ANSA) - Venice, August 18 - Venice Mayor Luigi Brugnaro on Tuesday kicked back at Sir Elton John after the British musician accused him of being "boorishly bigoted" in banning books about homosexuality from the city's schools.
"Fora i schei" (Cough up the money)" Brugnaro tweeted in Venetian dialect, saying "I challenge you to give real resources to save Venice".
Sir Elton, who has a house in Venice, had said: "Beautiful Venice is indeed sinking, but not as fast as the boorishly bigoted Brugnaro". The multi-award-winning artist, who has two children with his partner David Furnish, used his Instagram page to slam Brugnaro's "divisive" move alongside a picture of one of the "Furnish-John family's favourite storybooks". He continued: "It champions an all-inclusive world where families come in all shapes, sizes and colours. And most importantly, that families are about love. Our boys adore it.
And in the opposing corner we have Luigi Brugnaro, the extremely silly looking mayor of Venice." Brugnaro, elected at the end of May on an independent centre-right ticket, has banned 49 books he said promoted gender theory and gay marriage.