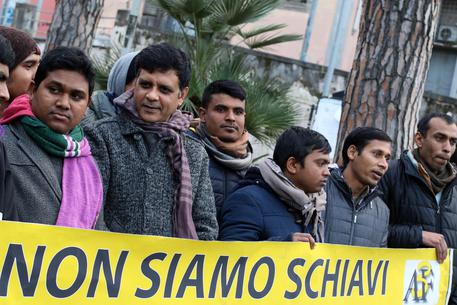 (ANSA) - Rome, May 7 - Interior Minister Angelino Alfano said Thursday municipalities should apply a ministry memo authorizing them to make migrants work for free. "Let them put (the migrants) to work, instead of letting them sit around doing nothing," the minister said.

Alfano added migrants should be equally distributed "among all the countries of Europe and all the localities of Italy - I believe no one can object to these two principles".

About 33,000 migrants have arrived in Italy to date this year, a 15% increase over last year's arrivals in the same period, an interior ministry official said Thursday.
And that puts Italy on track to receive as many as 200,000 for 2015 overall, well above last year's 170,000 migrants, said Mario Morcone, head of the civil rights and immigration department in the ministry.
This creates a "very difficult" situation, Morcone told a parliamentary committee on the reception of migrants.
La

st year's budget for migrant reception came to about 630 million and will be higher in 2015 due to rising numbers, said Morcone.
Meanwhile, Foreign Minister Paolo Gentiloni told a joint foreign affairs committee hearing that Italy is continuing to work with four other European nations on drafting a legal framework to present to the United Nations on the destruction of boats used by human traffickers.
Gentiloni said that a draft is expected "during the next week".
Some countries have said that measure could help to stop some human traffickers from exploiting desperate migrants who arrive in waves from Africa and the Middle East.
Other countries are helping more and more with migrants, he said, but almost all arrivals are still in Italy because its ports are some of the most southern in Europe.
"So this does not diminish the pressure on our country," said Gentiloni.

A self-styled government based in the Libyan city of Tripoli said Thursday it will deploy armed patrols to prevent migrants departing its shores for Italy and Europe. The Tripoli government, which is not recognized by the international community, said in a statement this is one of "five steps" it is prepared to take in view of "mutual cooperation" with the European Union on the migrant emergency. The other steps include "improving" migrant detention centers on its soil, deporting detainees back to their countries of origin, and pressuring countries such as Mali, Niger and Somalia to stop people from fleeing their homelands. The EU is mulling a possible United Nations-sanctioned joint military operation to destroy migrant traffickers' boats before they leave Libya, a move the Tripoli government said on April 24 it "would not accept". However, the same government said two days prior it is willing to "cooperate with the Italian government" on migration in the Mediterranean. Meanwhile in Italy, which is the first landing spot for many boats attempting the perilous crossing from Libya, some regions resisted central government statements that newly arrived migrants must be distributed equally across the country. The northern Valle d'Aosta region said it wouldn't host any migrants, while Lombardy Governor Roberto Maroni, who hails from the anti-immigrant Northern League party, said Interior Minister Angelino Alfano is "making fun of us". "Lombardy has already said there is no more room, so we have zero availability," Maroni said.

Three Italian Navy ships may have located the sunken wreck of a migrant vessel that sank off the coast of Libya on April 18, killing some 750 people, Navy sources said Thursday. Two Navy minesweepers and a corvette have located a blue 25-meter wreck lying 375 meters below the surface and 85 miles northeast of the Libyan coast. "It could be correlated to the vessel that sank April 18," the sources said.