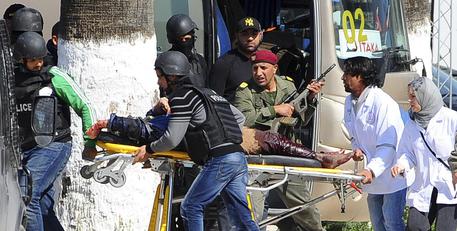 The overall toll of the mid-day attack was said to be 22 dead, included two terrorists, and 50 seriously injured, most likely tourists visiting for the day.

"It's possible that there are four Italian victims, but we are waiting for official confirmation," Gentiloni told RAI television.

The Italian casualties had reached Tunis aboard the Costa Fascinosa cruise ship, sources at the Italian embassy in the Tunisian capital said. Among them is Francesco Caldara, a pensioner from the city of Novara, relatives told ANSA. His wife Sonia Reddi was wounded but not fatally.

Tunisian Premier Habib Essid said the death toll included visitors from Germany, Italy, Poland and Spain.
No one initially claimed responsibility although Islamic State (ISIS) terrorists reportedly applauded the attack on Twitter.
Tunisian interior ministry officials said several gunmen armed with grenades and assault rifles attacked somewhere near midday.
The parliament nearby was evacuated as security forces worked to withdraw as many visitors as possible from the museum, where gunmen held a number hostage for at least two hours.
Premier Matteo Renzi said the terror attack struck a blow to moderation in political and social life, and has hurt everyone. "Wherever there is an attempt to kill moderation, a blow is struck against every one of us and against patriotic and cultural commonality," Renzi said.
Renzi also condemned the terrorists' decision to attack a museum in the city's downtown - "a symbolic place, a place of culture that was next to parliament," Renzi said.
Meanwhile, Vatican Secretary of State, Cardinal Pietro Parolin condemned the bloody terror attack as "cruel, inhumane, inconceivable".
"This (act) must be condemned in the most absolute terms," said Parolin. "Let us hope there will be no more violence committed in the name of God".
Federica Mogherini, the EU commission on foreign affairs, said that terrorist organizations were targeting an ever-widening range of "countries and peoples of the Mediterranean region".
She speculated that terrorists from Islamic State (ISIS) were behind the attacks.
"This reinforces our determination to cooperate more closely with our partners to address the threat terrorists," she said. Italian President Sergio Mattarella said the terror attack was "vile and hateful", a "heinous and cowardly act, committed against defenseless people".