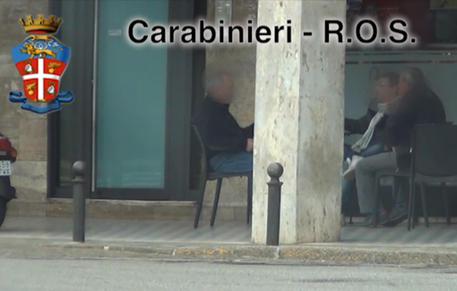 (see related) (ANSA) - Milan, November 18 - Police on Tuesday arrested 40 people suspected of links with clans belonging to the Calabrian-based 'Ndrangheta crime syndicate operating in northern Italy. The operation was the result of a two-year probe that also led police to film live an affiliation ceremony for the first time. Prior to this details of the ceremony for the bestowal of the 'santa', the highest level of 'ndrangheta affiliation, had only ever been recounted by former mobsters turned state's evidence. The arrests were carried out on charges of mafia association, extortion, and illegal possession of weapons across the northern regions of Lombardy and Veneto and on the southern island region of Sicily.
Investigators claimed the suspects belonged to three clans operating in the Lombardy provinces of Como and Lecco where they had infiltrated the local community.
The film of the affiliation ceremony was made during a convivial gathering of members of the three clans known as a 'mangiata' (feast) and includes references to Mazzini, Garibaldi and La Marmora, three leading figures of the 19th century Risorgimento movement for Italian unification. Investigators claim Garibaldi represented the local clan leader, Mazzini the treasurer and La Marmora another high-ranking member.