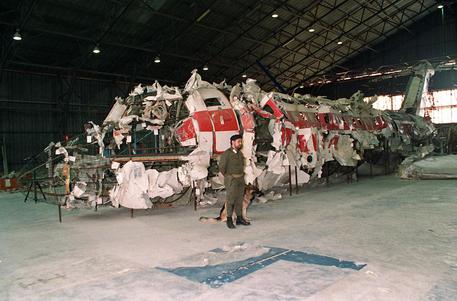 (ANSA) - Palermo, October 9 - A Palermo judge on Thursday ordered the Italian defence and transport ministries to pay a total of 5,637,199 euros in damages to 14 family members related to six people killed in a mysterious 1980 airplane crash near the Sicilian island of Ustica. Italy's supreme Court of Cassation last year ruled that a missile was the definite cause of the crash in which 81 people were killed while travelling on a commercial flight by the now-defunct Itavia carrier on June 27, 1980. It said that the hypothesis that the plane was downed in 1980 by a "missile shot by an unknown airplane" appears "by now consecrated", adding that "cover-ups" in investigations must now be considered "definitively ascertained". It also ordered a new civil trial to assess the responsibility of the Italian defence and transport ministries in Itavia's bankruptcy.
In April Premier Matteo Renzi signed an order to declassify a number of secret case files, including those on the Ustica disaster.
Over the years, Italy has sought information from the United States, France, Belgium and Germany about it.
In 2008 prosecutors reopened investigations after former Italian president Francesco Cossiga suggested that a French missile had shot down the plane by mistake.
Cossiga, who died in 2010, did not explain at the time why he had waited so long before giving his views.
Dossiers, books, and even a film called The Rubber Wall have been produced over the years about the airliner that crashed into the sea on its way from Bologna to Palermo.
Two international panels examined the wreckage. Investigating magistrate Rosario Priore and the prosecutors who succeeded him insisted they had found clear evidence of flight tracks being tampered with and radar scans cleaned up to remove all trace of other planes in the vicinity of the Itavia jet.
Magistrates and victims' relatives think the plane may have become caught in a dogfight between NATO planes and a Libyan jet whose wreckage was found in the southern Italian highlands some months after the Ustica crash.