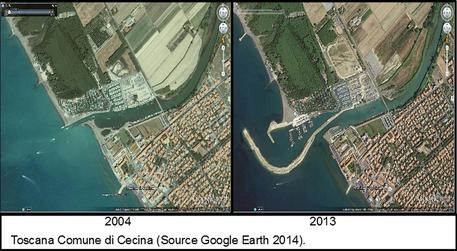 (ANSA) - Rome, August 6 - Italy's once pristine coastline has been "devoured" and "martyred" by floods of cement used to build infrastructure, resorts and shopping centres, the World Wildlife Fund (WWF) said in a report released Wednesday.
About 10% of the peninsula's 8,000-km coastline has been permanently altered by ports, motorways, dams and barriers, the report said. No region has been immune from the building frenzy, but the most "wounded" coastlines are in Sicily, Sardinia, and above all, the Adriatic coast. Described as "the most urbanized in the entire Mediterranean basin", it makes up 17% of the national coastline and is 70% covered in construction.
Even so-called "protected areas" have not been spared. As many as 312 "human macro activities" have eroded the natural soil from Italy's "beloved shores", giving rise to "structures that have altered the landscape, causing losses of biodiversity and natural heritage", the WWF warned.
The report cited notorious examples such as the rapacious development of Friuli's Sistiana Bay, a tourist resort built at Basento in Basilicata, and construction at Castellamare di Stabia in Campania.
The WWF denounced what it said is "a clear lack of planning," adding that there is no national "custodian" of the coastline to oversee development and prevent environmental degradation.
Instead, this task is fragmented between different levels of State, regional, and local governments.