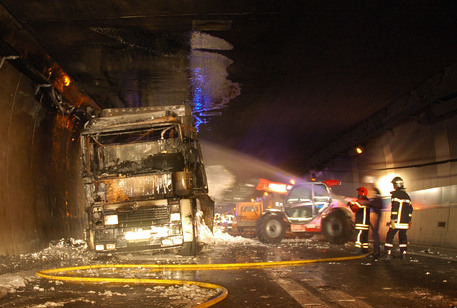 (ANSA) - Turin, April 10 - The Frejus Tunnel between Italy and France was closed Thursday after a crash left a truck in flames on the French side of the key road link. One person was hurt, but not seriously, rescue services said.
Three accidents, one fatal, have caused the tunnel to be shut three times in the last 10 years.
On November 29, 2010 the link was closed after another lorry blaze, leading to the construction of a new, additional rescue tunnel completed a year later.
However, no one was hurt or affected by smoke inhalation on that occasion.
On January 9, 2007 the tunnel was briefly closed after a truck caught fire, also on the French side.
The fire started after the brakes on the truck began overheating. Motorists and truck drivers behind the lorry were forced to abandon their vehicles and take refuge in the Alpine tunnel's security bays.
They were later escorted out by rescue workers.
The 12.7-km-long tunnel remained closed for 90 minutes while the emergency was dealt with.
In June 2005 a blaze broke out inside the Frejus tunnel which cost the lives of two people, both truck drivers.
The fire started on a truck which was transporting tires and quickly spread to three other trucks.
Firemen said afterwards that they had battled temperatures which topped 1,000 degrees centigrade and it took them more than a day to put the blaze out.
The tunnel was subsequently closed for two months for repairs.