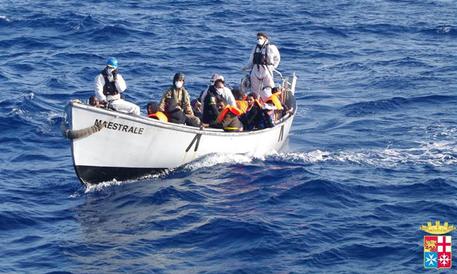 A file shot of migrants being rescued by the Italian Navy
+CLICK TO ENLARGE
09 April 201411:25 News

(ANSA) - Rome, April 9 - The Italian authorities have rescued around 4,000 migrants over the past 48 hours, Interior Minister Angelino Alfano said early on Wednesday. The minister added that at least one person had been found dead aboard one of the multitude of rescued boats. Late on Tuesday Alfano organized a meeting with police, Navy and coast guard officials participating in the rescue-and-surveillance Mare Nostrum operation to deal with the emergency caused by a upswing in mass migrant arrivals in recent days.
"There is no stop to the arrivals and the emergency is increasingly serious," Alfano said on Italian radio. Tens of thousands of migrants arrive in Italy from North Africa every year, and many others die attempting the hazardous crossing, which they often try in rickety, overcrowded boats.
Following two migrant-boat disasters in October 2013 in which around 400 people died, Italy set up the Mare Nostrum operation to prevent further deaths at sea.
Alfano said Wednesday that a total of 15,000 migrants have landed on Italy's coasts since the beginning of this year. He said that an estimated 300,000-600,000 more are currently ready to depart from Libya, adding that "this is a conservative estimate, as confirmed by European (Home Affairs) Commissioner Cecilia Malmstrom''.
Late Tuesday The Italian Navy's San Giorgio ship helped four overcrowded boats with port authority vessels, rescuing over 1,000 people including women and children, who did not have life jackets.
The patrol vessel Siro rescued 113 people with the help of merchant ship City of Sylon.
The Espero frigate declared a situation of emergency overnight when a boat with 261 people onboard sent out a distress signal. The immigrants were rescued early Wednesday.
The San Giorgio is sailing towards the Sicilian port of Augusta to drop off the migrants.
Coast guard vessels also rescued 200 people, including women and children, on a rickety boat off Calabria.
Someone on board the boat called port authorities to ask for help and the vessel was rescued off Roccella Jonica, where the immigrants are scheduled to arrive on Wednesday.
Furthermore, late on Tuesday the ships Maestrale, Euro and Foscari took to the ports of Pozzallo and Augusta 1,049 migrants rescued on April 7 and 8.