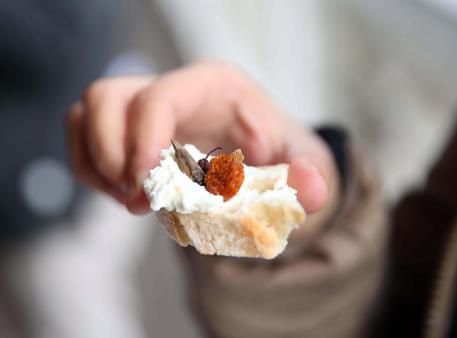 (ANSA) - Milan, October 27 - Dried crickets were served at Milan's Expo world fair on Tuesday during the first ever official insect tasting event in Italy.
Tasters at the event described the samples as "crunchy", "slightly salty" and "a bit like roasted peanuts".
Italian health authorities gave the go-ahead for the Belgium-farmed insects to be served after carrying out several chemical and biological checks to ensure they were fit for consumption.
"What is happening today could be seen as a historic event," said Maria Helena Polidoro from the Società Umanitaria association which organised it.
She said Italy still had no legislation allowing insect farming so the tasting event was a "major step forwards" ahead of a planned discussion on "new foods" in the European Parliament.
The cricket buffet was arranged by young chef Marco Ambrosino, who paired the insects with small ricotta cream canapés, sweet berries and chocolates.
Andrea Mascaretti, who devised the association's Edible Insects project, said insects were a food of the future, along with jellyfish and algae. As the Food and Agriculture Organisation (FAO) has highlighted, they are rich in protein and could play an important role in combating both global hunger and obesity.