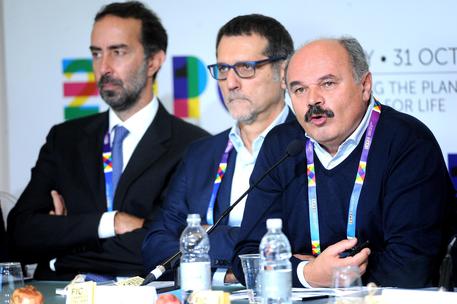 (ANSA) - Milan, October 27 - What has been dubbed the first ever 'Disneyland of food' is expected to open in Bologna either late next year or early the following one. The Fabbrica Italiana Contadina (F.I.CO.) will cover a surface area of some 80,000 square meters including a hectare of demonstrative fields and livestock raising grounds, and almost that much of markets and shops alongside 40 raw materials processing workshops, 20 restaurants under the artistic direction of chef Massimo Bottura, 10 classrooms for didactic activities and 4,000 square meters of pavilions for food-linked initiatives on Italy and its biodiversity. Forty of Italy's top agrofood firms and consortia will be represented, ranging from Parmigiano Reggiano and Grana Padano to Pizzoli potatoes, from Lavazza coffee to Balocco panettone as well as Pelino confectionary and Casillo pasta.
The project, presented at Expo Milano 2015 on Monday, was created as an initiative by Centro AgroAlimentare di Bologna (CAAB), was sponsored by the Bologna town council and will be managed by Eataly World, a company made up of Eataly and Coop. "It will be our Disneyland," said Eataly founder Oscar Farinetti, in announcing that the site will be ready between late 2016 and early 2017. "It will attract tourists from around the world. We expect to see six million visitors every year: two million foreigners and four million Italians, including half a million children - through school trips and special visits - and 600 business visitors." "I thought up F.I.CO. specifically for children," Farinetti said, "seeing their enthusiasm at the Expo. It's the same as I felt going with my father to the 1961 Expo in Turin: at 7 years old, for the first time I felt like I could be part of the future, and I hope that F.I.CO. will be able to spark the same sort of emotions in its small visitors." Adults will also find a great deal of interest in the 'Disneyland of food' including in its 20 theme-based restaurants and street food kiosks. Three-wheeled bicycles by Bianchi will be available for riding around the park, with a cart at its front and a small refrigerator to do some shopping while riding around the 'park'. An estimated 2,000 companies will be involved, with 3,000 workers in ancillary industries and 700 inside the park itself. "F.I.CO. will carry on the Expo's legacy," underscored Emilia Romagna Governor Stefano Bonaccini. "The regional government has believed in the Expo since the very beginning, even in the most difficult moments, as shown by the fact that - as soon as we were sworn in - we doubled the investment in the Expo. With this project, Bologna will be ever more at the center of Emilia Romagna and all of Europe, and will become an engine of growth for this country." "F.I.CO. is a unique project," added Bologna Mayor Virginio Merola, "which will surely changes the type of tourism coming to our city. Bologna aims to live on the diversity of Italian foods, tastes and people, to be a pluralistic city able to bring together different lifestyles with its 60,000 university students and its 120 nationalities."