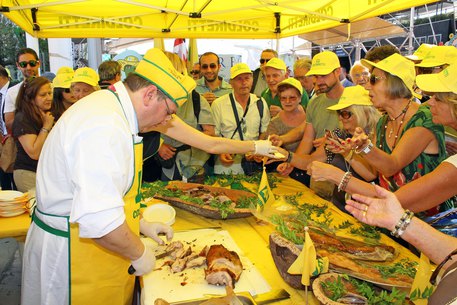 (by Elisa Cecchi).
(ANSA) - Rome, October 23 - The European Charter against food waste has been presented at Milan Expo 2015, two weeks before the six-month world's fair is scheduled to wrap up.
Premier Matteo Renzi on Thursday said Italian President Sergio Mattarella will close the food-themed Universal Exposition on October 31.
The European Charter was drafted by over 40 schools across seven European countries - Belgium, Cyprus, France, Italy, Portugal, Spain and the United Kingdom.
The document, which was part of a project involving 50 municipal governments - including 28 in Italy - was presented during the 'European forum of the young and local authorities against food waste and for the global right to food' at the civil society Cascina Triulza pavilion.
The charter outlines a number of concrete actions aimed at cutting food waste, from the home to supermarkets and restaurants.
Among the 80 suggestions to limit waste and promote sustainability are mandatory 'doggy bags' both at restaurants and public canteens and the use of glass rather than plastic for water bottles.
Other recommendations include allowing supermarkets to redistribute food that is about to expire and turning schools into community food distribution centres.
The project, which was carried out under the European Union's patronage, focuses on the problem of food waste and the fact that ''part of the population is not aware and educated'' on the matter, said Rita Biconne, the project manager of Felcos Umbria, one of the plan's promoters.
''There is little information on the issue and on the consequences of daily waste, which is why we decided to involve primary and secondary schools, as well as cities''.
Italian cities involved include municipalities around Milan, such as Sesto San Giovanni, as well as Pavia, also in the north, and Arezzo and Perugia in central Italy.
The charter was drafted with the participation of students to raise awareness among European youth.
It also vies to have an impact in developing countries by encouraging local authorities in Europe to sponsor joint initiatives aimed at improving food security.
An estimated third of all food produced worldwide for human consumption is lost or wasted - about 1.3 billion tons a year, according to the Food and Agriculture Organization of the United Nations.
About 100 million tons of food is wasted annually in the European Union alone and if no action is taken, food waste could reportedly rise to over 120 million tons by 2020.
The Universal Exposition in Milan opened on May 1 under the banner 'Feeding the Planet, Energy for Life' to focus on the fight against world hunger and food waste, among others, while celebrating culinary cultures worldwide.