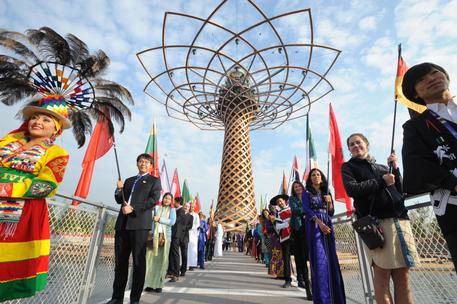 (ANSA) - Milan, October 22 - Expo's celebrated icon, the Tree of Life, won't be moved to a new location after the world's fair closes on October 31, said Expo Commissioner and CEO Giuseppe Sala.
On Wednesday, Expo celebrated an entire day dedicated to its once hotly contested symbol, which now is firmly established and indisputable.
The Tree of Life had a series of events dedicated in its honor, including an evening concert by the Teatro della Scala orchestra, directed by Pietro Mianiti, which included the "Tree Suite", composed by conductor Roberto Cacciapaglia.
After months of debate regarding its fate, Sala announced the decision during a press conference Wednesday, just 10 days from the close of Expo.
"The Tree of Life will stay here because it's much more complex to dismantle it and rebuild it somewhere else. We're talking about very delicate technology and the idea to move it is very daring," Sala said.
After curtains close on Expo, work will start November 2 to dismantle the pavilions, which should be complete by May 2016, but Sala said he thinks it will be complete before that.
Starting next spring, however, Expo's icon will come back to life together with two other symbols of the world's fair: Palazzo Italia and Pavilion Zero.
During the upcoming months of construction work to dismantle the pavilions, Sala said the Tree of Life, Palazzo Italia and Pavilion Zero will be sealed off, and he assured "we'll provide maintenance, so that they can come back to life in the spring", adding that Palazzo Italia will keep the current exhibition on Italian identity curated by Marco Balich on permanent display.
So, the Tree of Life, symbol of Expo - which also ensured its evening success with light shows and special effects - will continue to live.
During the six months of Expo, 14 million people attended its evening shows, representing two-thirds of all visitors.
The hashtag #albertodellavita (#treeoflife) even surpassed that of Christmas tree.
The Tree of Life's success is such that other countries have requested similar models, which have Italian technology and Italian design.
"They're asking us for it in China, the Gulf States, and one of the 'stan' countries, and we'll export Italian know-how and creativity to the world," said Marco Balich, the Tree's creator.
The 'know-how' is that of Lombardy's Orgoglio Brescia consortium, which built the Tree, and is made up of 19 companies from Brescia.
"This symbol is representing us in the world. We can export its technology, made with a lathe and innovation, anywhere," said president of Orgoglio Brescia consortium Paolo Francescetti.
Prior to the world fair's opening, the Tree was the most troubled work at Expo, so much so that it was feared it might not even be completed.
Despite those fears, co-sponsor Coldiretti farmers' assocation never doubted the project.
"We believed in it from the beginning. For us the Tree is the symbol of our agricultural traditions and of biodiversity," said Coldiretti President Roberto Moncalvo.
Pirelli also co-sponsored the project.
"The Tree of Life's success is Italy's success and Milan's success," said Pirelli CEO Marco Tronchetti Provera.
"This city has always been a symbol for the country. After years of decline, there's a recovery of energy and Milan is being reborn. There's positivity and a different energy," he said.
Expo President Diana Bracco also expressed her approval of the decision to keep the Tree of Life at Expo.
"In Palazzo Italia, the country's narrative starts, and its grand finale comes in the symbolism of the Tree of Life. They can't be separated, they complement each other," Bracco said.